If you still have questions or prefer to get help directly from an agent, please submit a request.
We’ll get back to you as soon as possible.

The RIO Education Data Factory is used to load a set of sample data for RIO Education into an org. It is intended be used with a fresh install of RIO Education to quickly provide new users with data that allows them to test out how RIO Education works. 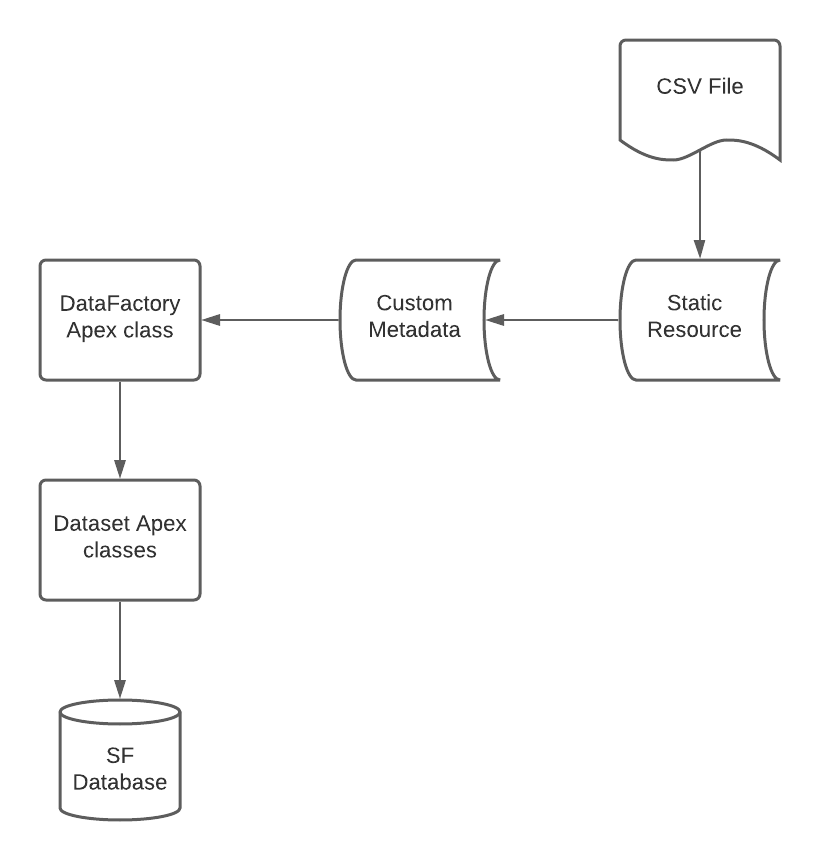 This diagram shows the stages that data goes through in the Data Factory program. These stages are described in detail below:

The data that will be loaded by the Data Factory is all stored in CSV files. Each CSV file will contain the data for one 'data set', with the rows of the file representing records and the columns representing fields. These CSV files are stored in Salesforce as Static Resources.

The Data Factory makes use of Custom Metadata Type called RIO Education Data Factory Mapping. These mappings are used to associate a CSV Static Resource with any other information needed to load that data set into Salesforce. Each mapping represents a single data set. The mapping metadata type has a series of custom fields that are described below.

The Apex functionality for the Data Factory consists of a main DataFactory class and separate classes for each kind of object that is inserted. For example Dataset_ACC handles data sets that have Account as their target object.

Note that this is one class per target object, not one class per data set. For example, the Educational Institution Data Set and the University Department Data Set both use Dataset_ACC, as they both insert account objects. The only object that requires more than one class is Session Time‍, which is split into Dataset_ST_Temp and Dataset_ST_Class.

The main DataFactory class contains the generate data methods that can be run by the user. Currently the only method is generateAllData(), which simply loads all the sample data at once. This method will retrieve all the mappings for the data that is being loaded and then for each mapping, will call the generateData method from the appropriate Dataset class for that target object.

There are separate dataset classes for each kind of object that is inserted. For example Dataset_ACC handles data sets that have Account as their target object. Note that this is one class per target object, not one class per data set. For example, the Educational Institution Data Set and the University Department Data Set both use Dataset_ACC, as they both insert account objects.

The only object that requires more than one class is Session Time‍, which is split into Dataset_ST_Temp and Dataset_ST_Class, because the process of inserting Session Times is different depending on whether the associated Session is a Template or Class record type. The code for the DataFactory uses upsert not insert, meaning that the DataFactory may be run multiple times. This may be useful if some data loaded by the Data Factory is accidentally deleted. However, caution must taken when modifying any data that is loaded, as running the Data Factory again will restore it to its initial state.

Each dataset class contains a generateData method that is called by the main DataFactory class and converts a CSV file into records of the respective object and then upserts those records. The current dataset classes can be seen below.

Note that there is one dataset class that performs additional functionality other than just upserting records. RIO Education contains a validation rule on the Fee Schedule object that means that Fee Schedules cannot be approved unless they have at least one related Fee Schedule Term.

How to use it

The RIO Education Data Factory is presently only able to be used by running an Apex script. Future releases will allow it to be run using a UI interface.

The Data Factory comes pre-packaged with several sample data-sets. However, we understand that many customers will want to customize the data that their Data Factory loads. The Data Factory does allow some degree of customizability, however there are limitations that need to be taken into account.

Users are free to add both new static resources and new custom metadata records. However, it is not possible for them to create new dataset Apex classes. This essentially means that users are free to add new data sets to the sample data, but the target object for their new data set can only be one of the objects supported by the existing dataset classes. See the Dataset classes in the How it works section for a list of supported objects.

Also, new static resources and CSV files must abide by a set of rules (this section). If these rules are not followed, correct behaviour is not guaranteed.

Neither static resources, custom metadata records or Apex dataset classes can be deleted by the user after the managed package is installed. This means it is not possible to actually delete existing data sets. However, each custom metadata record has an Active? checkbox field. This field can be unchecked on any datasets that the user does not wish to load. The Apex code will ignore datasets that have an unchecked active flag. These data sets can be re-added at any time by simply editing their active flag to be checked.

Be careful when deactivating data sets, as if the deactivated data set has dependent data sets that have not been either deactivated themselves or are already loaded in the database, attempting to run the Data Factory will cause an error.

It is not possible for a user to edit existing static resources or Data Factory Apex classes. However, it is possible for users to edit certain fields of existing custom metadata records. Specifically, all custom fields may be edited. This means that the label and name of the mapping cannot be changed.

This has the potential to cause problems. For example, changing a data set to insert something completely different may seem like a viable alternative to creating a new data set, but because the labels and names cannot be changed, you may end up with confusing inconsistencies. For example, changing the Academic Program Data Set to insert something other than academic programs will make debugging very confusing and is not recommended.

Another potential problem could arise from fields that do not match up with each other. For example, if you edited a data set with a target object of Account and changed the static resource to be CSV file that inserted a different kind of object, you would get an error because the code would be unable to translate the CSV file into valid account records.

Generally speaking, editing the custom metadata directly should only be done for small changes, such as changing the static resource to load different records or to change the sequence number. Any changes that will change the target object or type should instead be done by removing the existing data set using the active field and creating a new data set with the new desired functionality. Any direct edits to custom metadata records should conform to the rules.

These are the rules that must be followed when creating or editing CSV files, static resources, and custom metadata records.

This is only Version 1 of the RIO Education Data Factory. Here are some of the features that are planned to be added in future releases.

Future releases of the Data Factory will feature the ability to group data sets into different data groups. This will enable users to load specific data groups at one at a time, instead of loading all the data at once.

The current plan is for the initial data groups to follow the structure of the RIO Challenges, with each challenge corresponding to a different data group. It should be noted that data groups, like data sets will have dependencies.

For example, loading the data for RIO Challenge 5 will likely cause an error if the data for RIO Challenge 4 is not already present. To fix this, it is likely that loading a data group will also load all data from previous data groups, so loading Challenge 5 will also load Challenge 1 - 4. Because the Data Factory uses upsert, this should not cause an error if the previous data groups were already loaded, but it will reset them if they have been modified manually.

Future releases of the Data Factory will feature the ability to delete some or all of the data that has been loaded by the Data Factory. We will need to ensure that this method does not accidentally delete any data in the org that was not loaded by the Data Factory. This will probably be done using some sort of watermark when records are loaded. We will also need to handle deleting child records. What kinds of data will be allowed to be deleted (individual records, data sets, data groups etc) has yet to be determined.

Future releases of the Data Factory will feature a Lightning Component UI. This UI will allow users to graphically select what data group they want to load and then load the data by clicking a button, rather than running an Apex script. It will also allow deletion of data to be done in a similar way.

We will look to make improvements on error handling in future versions.